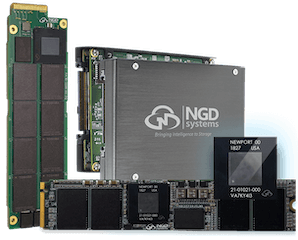 Always be the
first to know!

What To Know About Computational Storage Devices

Some architectures call for big chunks of memory-like storage located near the compute function, while, conversely, in some cases, it makes more sense to move the compute nearer to the bulk storage. In this series of articles we explore the architectural decisions driving modern data processing… and, specifically, we look at computational storage

Software runs on data and data is often regarded as the new oil. So it makes sense to put data as close to where it is being processed as possible, in order to reduce latency for performance-hungry processing tasks.

IRVINE, Calif.—August 7, 2019--NGD Systems, Inc., the world leader in NVMe Computational Storage, announced today at the Flash Memory Summit that it has embedded the Azure IoT Edge service directly within its Computational Storage solid-state devices (SSDs), making them the only platform to support the service directly within a storage device. In addition, NGD Systems introduced its 32TB Newport U.2 SSD, which offers <12W of power, doubling the capacity of the existing Newport Platform U.2 SSD form-factor. The two announcements underscore NGD’s continuing leadership in developing the edge ecosystem, achieving improvements in power, cost and physical footprint for data-intensive big-data-set workloads. These real-world use cases prove that scalable, integrated Computational Storage devices provide empirical benefits to edge applications.

WASHINGTON, D.C. – SPROCKIT, the global marketplace connecting the world’s top market-proven emerging companies in media, entertainment and technology, announces the first round of companies that will participate in the program at the 2019 NAB Show, held April 6-11 in Las Vegas.

NVIDIA’s 2019 GPU Technology Conference (GTC) kicked off on Monday of this week at the San Jose Convention Center. While the name of the conference might suggest to the uninitiated that it would be around gaming and other graphics technology